On March 19th in Sao Paulo, Brazil, was founded the first Latin America Chapter of FI. This was a pioneering, history-making enterprise for Filitalia. The report of the Past President, and founder, Pasquale Nestico 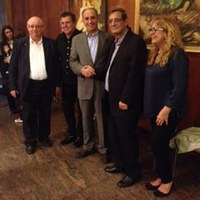 As they say, “Mission accomplished.” On March 19th in Sao Paulo, Brazil we founded the first Latin America Chapter of FI. This was a pioneering, history-making enterprise for Filitalia. In the presence of 15 people with a total of about 40 members , a ‘Pro tempore Board of Directors was formed with President Ivan Roberto, the Vice President Zeno Capato and the organogram of the Chapter. Everything was done on the second floor of the Italian center where there is also the “Circolo Italiano” (founded more than 100 years ago) with a couple of hundred members.

The election of President Pro tempore, Ivan Roberto, in my humble opinion, will be a winner for the benefit of FI in Brazil. His whole family is behind him. But its success also depends on his health and that’s why I have instilled in him and his wife Dalva Pereira (a sweet and able lady) the urgent need to stop smoking. The same thing I did with Evelin Solange who hosted us on the last day, Thursday; My room was large and comfortable with a large bathroom that both me and Cristina Mantovani insisted to give to Daniel, even though stubborn and modest, he was happy with a smaller room, with the excuse that he did not want to climb stairs with suitcases. Cristina and I (perhaps more me) instead concluded that the real reason was that he wanted to stay close to the kitchen and refrigerator; you never know hunger at night sometimes causes trouble!!! Daniele, you are great and we await you in Philadelphia, the city of brotherly love. Lunch offered Friday from Flavio Baraldi, his mother Aurora (a talented painter) and his father Roberto, was tasty in a beautiful green colored house (about an hour from Sao Paulo) where I saw plants that I had never seen before and the tree “banana water.” We were in the company of Marconcini, Mauro Cappelletti of Buenos Aires and his girlfriend Evelyn Wairick and João Paulo Chavez. So many nice people helped us to have a unique experience, full of affection and culinary innovations while we brought from Philadelphia the Mission and Motto of FI. to Brazil. I loved it; I just missed my Family, especially Christian Giovanni and Luca Pasquale; the latter was asked by his father David “Did your Grandfather go to Brazil to buy avocado?”; he replied “no, he went to buy pasta.”

The only regret is not being able to meet with the House of Representative and friend Hon. Fabio Porta due to the fact that he arrived the day after my departure. He was, however, met by President Ivan Roberto and Cristina and Daniel. Thanks Fabio for having paved the way, and many thanks for your essential contribution in your role in the Chamber of Deputies of the Italian Parliament. We are sure that you will be active in growing the Chapter and help us to create more Chapters in this beautiful country that is Brazil. Obligado!

In conclusion, I say thank you Filitalia International for having been able to make us fall in love with you and desire to take you everywhere in the world. Thanks to the members of the International BOD and the President, Rosetta Miriello, for the trust given to us to pursue this historic project which is expansion. “We are so ahead that if we turn we see the future.”